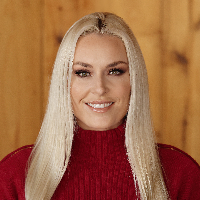 Lindsey Vonn, born on October 18, 1984, in St. Paul, Minnesota, is the most decorated American ski racer in history and is widely regarded as one of the greatest of all time. Lindsey burst onto the international skiing scene in 1999 at the age of 14 and has since captivated the world with her perseverance and superhuman abilities on the slopes. She’s won four World Cup overall championships—one of only two female skiers to do so with three consecutive titles in 2008, 2009, and 2010, plus another in 2012. Lindsey won the gold medal in downhill at the 2010 Winter Olympics, the first one for an American woman. She also won a record 8 World Cup season titles in the downhill discipline (2008–2013, 2015, 2016), 5 titles in super-G (2009–2012, 2015), and 3 consecutive titles in the combined (2010– 2012). In 2016, she won her 20th World Cup crystal globe title, the overall record for men or women. Her total of 82 World Cup victories is a women's record. Although Lindsey single handedly put American ski racing on the map, her journey was punctuated by divesting setbacks and brutal injuries. Broken Ankle, gruesome bruises, and critical damage to a nerve in her arm, just to name a few. For those who’ve struggled to pick themselves up after facing a downfall, Lindsey’s blind resolve isn’t just inspirational; it’s hard to put into words. Her fearlessness is what made her successful, and what pushed her past genuine limits. Lindsey is also a New York Times Bestselling author for her 2016 debut novel Strong Is the New Beautiful: Embrace Your Natural Beauty, Eat Clean, and Harness Your Power and has served as an International Games Ambassador in the 2018 Winter Olympics and is also the founder of the Lindsey Vonn Foundation, which supports girls through scholarships, education and athletics. In February 2019, Lindsey announced her retirement from ski racing and that same year commemorated her final season with the release of her HBO documentary “Lindsey Vonn: The Final Season.” Since her retirement, Lindsey has launched a production company, Après Productions, seeking to chronicle stories of sport, women and determination. And as an extra thrill, she added the title of “Host” to her resume with the premiere of the Amazon Prime Video show The Pack where Lindsey and her dog, Lucy, host a global family-friendly reality competition series. With her vast social media following, growing portfolio of books, and TV projects, and commitment to her namesake Foundation, Lindsey looks forward to the next chapter of her life as she continues to build her legacy and empower women of all ages across the globe. “Follow your dreams. If you have a goal, and you want to achieve it, then work hard and do everything you can to get there, and one day it will come true” – Lindsey Vonn