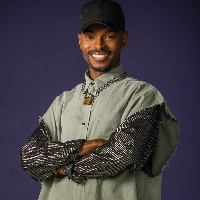 Kameron Mack is the Creative Director for Will Smith and Jada Pinkett Smith's production company, Westbrook Media in Los Angeles, California. Some of his recent work includes directing the Fresh Prince Mansion Reunion, launching Will Smith's snapchat show Will From Home, overseeing all Jada's and Red Table Talk social content, showrunning supermodel Naomi Cambell's Youtube series No Filter with Naomi and Being Naomi, plus more! Before joining the Westbrook team, Kam was the Supervising Video Producer, a director and an on-air host for Complex Networks, where he developed and produced shows like Get it Together with Aleali May, Tunnel Takedown and Complex News Presents. He has worked on several network television shows and is the creator of the award winning film Kings America Made, which tells the story of a young black boy's journey to find peace in America while grappling with his own mental trauma."