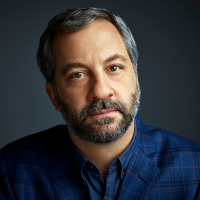 JUDD APATOW is one of the most sought-after comedic minds in the industry—having directed, produced, and written many of the biggest comedy films and hit TV shows of the last two decades. Apatow is currently in production on his new Netflix comedy, The Bubble, which he is directing, producing, and co-wrote with Pam Brady. The star-studded cast includes Karen Gillan, Keegan-Michael Key, Maria Bakalova, Leslie Mann, Iris Apatow, Pedro Pascal, and David Duchovny. The Bubble follows a group of actors and actresses stuck inside a pandemic bubble at a hotel attempting to film a movie. Apatow is also co-directing, with Michael Bonfiglio, and producing the HBO Documentary Films two-part George Carlin documentary. Upcoming, he is set to produce an untitled romantic comedy for Universal starring, and co-written by, Billy Eichner. The film follows two men with commitment problems attempting a relationship. Apatow is also producing a semi-autobiographical comedy about writers and comedians Kenny and Keith Lucas (The Lucas Bros.) and their lives as identical twins in Newark, New Jersey, in which they will star and also co-write. In June 2020, Universal Pictures released Apatow’s most recent feature, The King of Staten Island. The film starring Pete Davidson, Marisa Tomei and Bill Burr, was inspired by events from Davidson’s own life. Apatow directed and produced the film, and co-wrote the script alongside Davidson and Dave Sirus. In addition to film and television, Apatow gathered journal entries, photographs and essays for an intimate portrait of his mentor and legendary stand-up comic, Garry Shandling to create It’s Garry Shandling’s Book, a testament to the lasting impact Shandling had not only on Apatow personally but in the world overall. Published by Random House, the book expands on Apatow’s HBO documentary The Zen Diaries of Garry Shandling. The documentary, which released March 2018 won Apatow the 2018 Emmy Award for Outstanding Documentary Or Nonfiction Special. In Television, Apatow executive produced the highly acclaimed Crashing on HBO, which starred comedian Pete Holmes in a semi-autobiographical look at his life and career. He also served as the co-creator of Netflix’s Love, which is streaming the complete series on Netflix, and executive produced the multi-award-winning series Girls, Freaks and Geeks, Undeclared, The Ben Stiller Show and The Larry Sanders Show. His Netflix comedy special Judd Apatow: The Return, marked his comeback to the stage after a 25-year hiatus. Apatow directed the films The 40-Year-Old Virgin, Knocked Up, Funny People, This is 40, and Trainwreck. He produced Superbad, Bridesmaids, Pineapple Express, Anchorman, Step Brothers, Talladega Nights, Forgetting Sarah Marshall, Popstar and The Big Sick. Apatow lives in Los Angeles with his wife, actress Leslie Mann, and their daughters Maude and Iris.