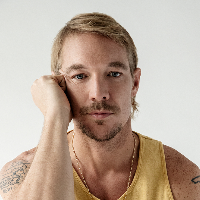 Born Thomas Wesley Pentz, Diplo is one of the most dynamic forces in music today under his own name, as well as a member of the now legendary Major Lazer, which most recently released Music Is The Weapon, their first album in five years; LSD, the psychedelic supergroup with Sia and Labrinth whose debut album has been streamed over one billion times; and Silk City with Mark Ronson, whose Platinum-certified “Electricity” with Dua Lipa topped charts worldwide and won a Grammy Award for Best Dance Recording. In 2019, Diplo released an in homage to deep house, Higher Ground, via his recently-launched label of the same name; and in 2020 debuted his first country album, Diplo Presents Thomas Wesley Chapter 1: Snake Oil, as well as his first ambient album MMXX later that year. As the world’s most in-demand producer, Diplo has worked with artists as disparate as Beyoncé, Bad Bunny and Turnstile. He continues to helm his own long-running label Mad Decent and tour the world over.